Of the six movies on the set Carole Lombard: The Glamour Collection the last is True Confession (1937) and I think this may be the best. I loved this one.

Once again it teams Carole Lombard with Fred MacMurray – and they make a great combination. This time, however, MacMurray gets to play something a little bit different.

No longer the cocksure young man with a secret or two and a bit cagey, here he plays the gullible innocent.

While this film is kind of romantic-comedy, it probably more properly belongs in the screwball category. Here, Lombard is the ditzy star and she’s absolutely wonderful.

The basic premise of the film is a husband and wife (MacMurray and Lombard). He’s innocent and bullheadedly honest and she’s a compulsive liar. In fact, Lombard does a little thing of putting her tongue in her cheek each time she embarks on another lie. 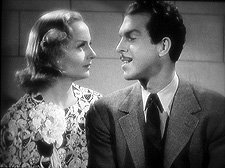 He’s a struggling lawyer. He won’t take cases unless his clients are innocent. The family bank account is suffering because of his high standards, and because he refuses to allow his wife (Lombard) to work. Meanwhile she is at home, desperate for her husband to get some cases and passing her time typing out stories – an outlet for her imagination (and lies).

She has also managed to land herself a job – pretty high pay for little work as a secretary. As it turns out, her potential employer has some less than respectable notions of secretarial work. Lombard also must keep the job hidden from her husband. 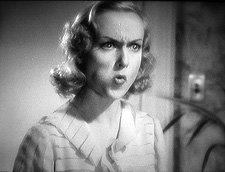 Although she didn’t do it, her husband (MacMurray) is to defend her, believes she did but thinks he has a defense for her, so she admits to the crime.

And then into the mix comes a cynical and cultured, but down on his luck, legal aficionado, John Barrymore. 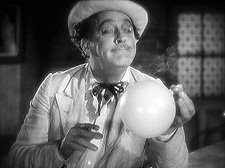 The pacing is fast and the situations ludicrous and hilarious. While the business of the tongue in the cheek may be a little over done, Lombard is as funny as she ever was. This is Lombard at her absolute peak as a comic-romantic actress. This is Lombard as the queen of screwball. With the possible exception of My Man Godfrey, I don’t think I’ve ever seen her better.

Personally, I watch Carole Lombard movies to see this Carole Lombard. (Fred MacMurray is pretty darn good too – as are the supporting performers in this film, especially Una Merkel as Lombard’s best friend.)

This movie’s a gem. Recommended.